As vice president of a Los Angeles film-production company in the 1980s, Ronald Kaufman had nearly everything that he’d ever wanted in a job — great pay, friendly co-workers and interesting work coordinating product placements in films. Unfortunately, he hated the job.

“The owner of the company was a master at intimidation and would scream at everybody. An hour later, he would be a great guy. It made everybody unhappy to be there,” says Mr. Kaufman, now an executive coach. 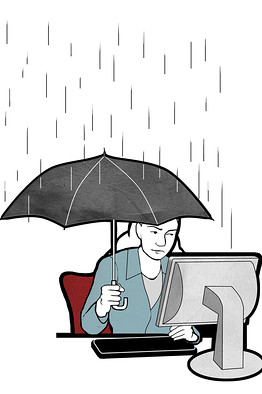 But he knew he wouldn’t earn the same salary elsewhere, so Mr. Kaufman committed himself to making his situation work. “You can’t really change people’s nature, so I changed how I responded to him. I learned to align with his demands, instead of questioning them, and that made my 8½ years at the company so much easier.”

Toxic workplace relationships, failing company fortunes and limited advancement opportunities are just a few compelling reasons to quit a job. But career experts say many workplace problems that employees may think are irreconcilable can be improved or even resolved with some action and a change of attitude.

First, find out if your problems are unique. Reach out to co-workers in other departments, peers through industry associations or even call colleagues at other companies to compare notes.

“It’s a very individual perception that leads to people believing that others are receiving better treatment,” says Christopher McCarthy, professor of educational psychology at the University of Texas at Austin, who researches workplace stress.

Separate the demands of work from your own expectations of yourself. If you’re unhappy about falling short of your own personal career goals, try breaking your big goals into smaller, more realistically achievable ones. This can improve your morale by reinforcing small successes.

Pitch your boss on a less formal and more goal-oriented workplace. And offer improved results in exchange for more autonomy. “Most people are generally happier at work when given more creative freedom to do their jobs,” says Mr. McCarthy.

If the operational processes of your job are leading to failure, alter your approach, if you can. Spencer Belkofer was an account representative for a telecom firm in Montgomery, Ala., and he didn’t like the way the company trained him to sell phone services. Unhappy customers frequently complained about bad contracts. So Mr. Belkofer decided to go off script and spell out every detail of the services offered, and he frequently sided with customers to resolve problems.

The extra effort didn’t improve his sales, but Mr. Belkofer felt better about the work and customers thanked him for being forthright.